So I have been doing much research on the aspect of a curse. I did dive into the practice of blood basting or offering up first burns. No, I stuck to the basic etymology and ideology of humans relationship to a curse. It’s very simple. The word originates whenever someone says something against someone else. That’s why scholars have trouble finding the origin of this word and any other meaning that ill, anger intent or situation. What matters most is not a curse but words. I used to laugh at the whole bibles “name is claim it” and “no don’t let the devil hear you!” And now thought I still think this is just one very simple aspect to use fear to deter people from proclaiming any malicious words or disdain expression. So, that’s simple. If a guy in my dorm keeps leaving his wet clothes in the wash and I say “damn it! I hope he get what comin to him!!” You can best believe that is a curse. What if he has a legit reason?! Like slippery finger disease?! Now if I were to say “damn! I hope he gets what he deserves” this isn’t a curse. Because, well, maybe you just sent out energy to assist the doctors in making some super finger healing ointment! This may be what he deserves! My anger release would be nothing more then a charge of negative energy in the room, and probably assist in helping me be bitter about laundry etiquette. This should show that simply naming and claiming doesn’t have quite the impact as one would hope. This is because of intent and often more than anything; wording. The idea of cursing someone or something is a blast or thought out act of distinctly intense energy. “I am so ugh that I’m gonna….!” While declaring “I’m gonna be rich!” To my coven, congregation, or nudist group does quite have to same punch. The receivers of the proclamation are many, where as with curses and blessing at times too!, it is charged to one distinct origin. It’s not going to happen that people will stand in a congregation cursing each other but they would stand and proclaim. And this sends energy into the action to BEGIN manifestations but the rest is a lengthy process of commitment, intent, and drive to work the energy to the cause or outcome. To be rich, you may simply need to work really really hard. As you do this thought the energy would build and help you if you continued to work in such manner.
Now I could imagine a street riot of people strewing streams of curses across the street, or perhaps a fight in the hall, or the abusive husband; but then again we see the intensity of this action, this energy.
I read an article “is it worth to curse” and the author says that if her sister were rape she surely would curse the perp. Because the damage is already done (the worry of curse 1 and you’ll be 3x cursed back doesn’t apply then), it seemed she denoted it a type of retribution. And I agree.
I recently had a friend ask me if I did dark arts or black magic or whatever she said. She asked if I worked with curses. And I said “well I’m sure I’ve been mad enough at someone I’ve probably said something I shouldn’t have. Don’t we all?!” And she said “no real curses what do you think about them” so this encouraged me to research. I think she felt someone had put some random curse on her, but I wanted to ask her if she knew the definition of kharma. An even dharma! I’m of the school that if you do things knowingly hurting others, live life ego lead (which is easy to do aahhhh), or live a life as if people owe you (this often is the relationship with jealousy, selfishness, and feeling rejected: these people love to do things for people but are unaware that the expect something in return and when they don’t get it they feel rejected and this insues drama if they’re unbalance so as they can communicate their expectations), you will attract negativity to you. Doing positive thing attract negative ions to you but because we may be balanced and confident we become merely a conduit of a small displacement of Ionic energy rather than having bad thin happening unusually too often. These negative ions are transformed by spirit, too, to teach us lesson, manifest a dark or light side of us we didn’t know we had, and much more. Ying and yang. If I bask in a bubble of love juice all day long I’d drown in my own lack of need for humanity. But, we are really humans and capable of saying things that have impact, doing things to change lives, and more!
What I learned about curses is simply this: we all do it, it nothing less than saying something in the heat of the moment, and a term used to scare people away from antiChristian studies. Curses and the antithesis of blessings. And that’s about it! If blessing is a good word. There may be a better word! 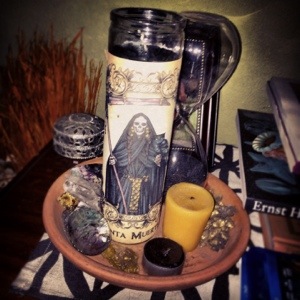 So, I have had a flood of artist implosion and what seems to defy me is time! I need to stop making things and just add them to the store 🙂

He’s wearing the ear cuff! Hahahaha what a blessed little beaver for being my model today! Check out my site! As I work on it more tomorrow, mr, Beaver may make his modeling debut!
Altar L

Jewelry for the Full Moon

Skin is our fabric. Natures canvas. 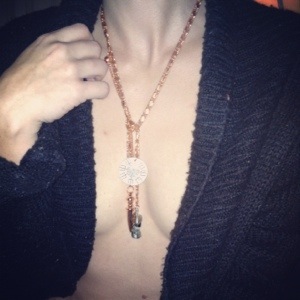 Metals of the earth, paint my flesh’s delicious night, as I breathe expanding the delicate red vines to the sounds moon waves varnishing my salty back!!!

My latest inspiration is my 5 year old daughter who dreams of being a cowgirl.  So, I thought why not make western jewelry fashionably appealing to my hipster generation of lovers.  This is what I came up with last night: 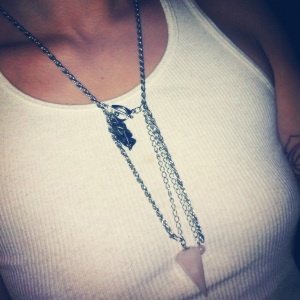 Rose Quartz is an excellent stone for love, drawing or opening the heart.  It also helps you learn to love yourself! Headaches, sexual dysfunctions, fears.